For a very long time in history, heart disease, AIDS, cholera, etc. were dreaded diseases, almost synonymous with death. But today, the death rates of these diseases have been reduced by over 70%. A twentyish patient carrying AIDS virus is still very likely to live till his sixties and seventies or even longer.And the cause of his death might be geriatric complications instead of AIDS. The success in curing these diseases is attributable not only to themedicaltechnologiesprogress but also to the popularization of social recognition, high-priority attention, and early detection. However, progress in psychological/mental illness treatment has been relatively slow because of various misunderstandings, ignorance, neglect, extremely late detection, and even social discrimination and mockery. 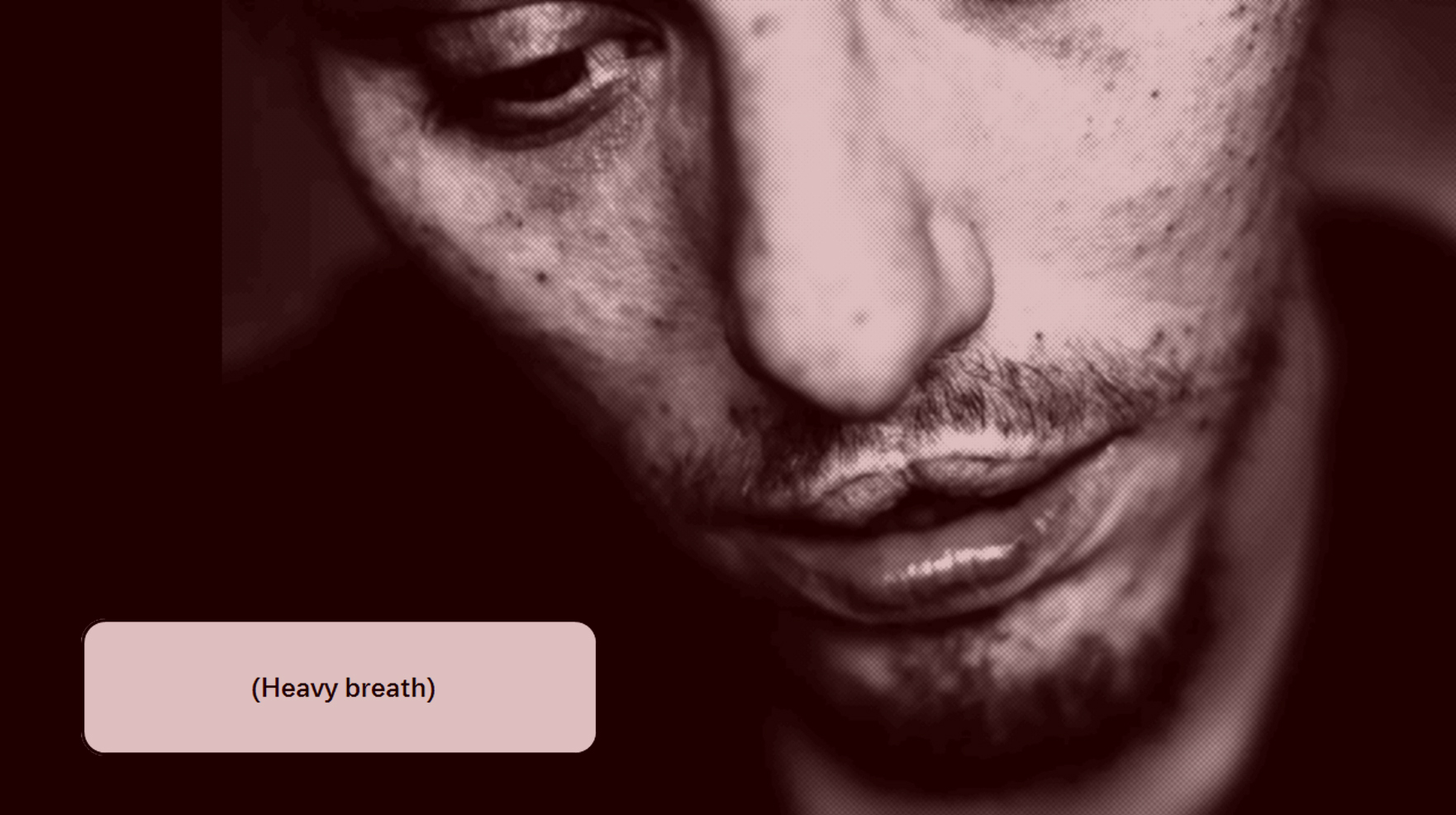 The World Health Organization estimatesthat there are nearly 500 million people living on their tiny planet who are affected byamental illness, and a suicide is committed every 40 seconds. Mental health disorder has become a serious and extremely costly global health problem, affecting people of different ages, cultures, and socioeconomic groups. In China, the lifetime prevalence rate of various mental disorders is 17.5%, meaning that nearly one out of every five people suffers from mental illness.

Patients of mental/psychological illness live shorter thanhealthy people ,and this life expectancy gap is as much as 20 years.Apart from suicide, the main reason causing the tragic is that they can’t receive fair and equal treatment and be treated with respect. What’s worse than diseases is the backwardness of social recognition and the infringement on human rights.

John Hejduk (1929-2000) – Architectural theorist and historian Mafredo Tafuri said that John Hejduk was the most important figure of the “New York Five”, and John Hejduk was praised as one of the “four founding fathers” of contemporary American architecture.

In 1967, he began his early exploratory research which involved the creation of space using geometric shapes, but he soon moved away to explore new influences in architectural design: psychology, mythology, and religion. His drawings often expressed themes of architecture through a rather dark lens, and his most famous work, the New England Masque (1981), was inspired by dissimilated marriage.

John Hejduk’s works often possess dramatic strength. He characterized architecture as vivid roles that can converse with the city and people, and tried to explore deeper philosophical questions through architecture. Inspired by John Hejduk, designer of this project wantedto create a “consciousness space” that can remind people of some serious social issues that are often-neglected and lead them to think and Introspect.

鼓起勇气 NERVE= n. (1) Nerves are long thin fibres that transmit messages between your brain and other parts of your body.

(2) Courage Vt. To encourage sb to be confident

In this high-pressure era,

We can’t continue to ignore it. 「Do you have the nerve…?」

Do you have the nerve?

Do you have the nerve to face the reality?

Do you have painful nerves? 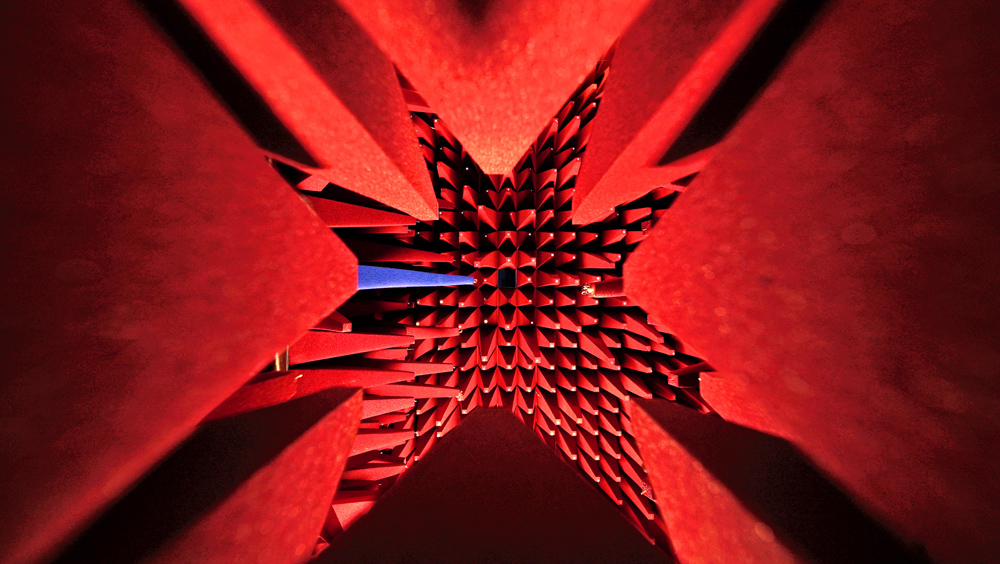 A design projectcannot change the track of an era. Nor can it eliminate tragedies in the world. But at the very least, the designer hopes that,through the intuitive experience ofNERVE ,more people will pay more attention to the truth hidden under the hardshell of our era.

Thefaçade of NERVE is mainly built by steel plates, which are in strong contrast to the soft sponge material of inner space. 900 “Nerve antennae” of different lengths and directions, were created by digital language programed through “Grasshopper”. In the GH program, these “tentacles” change their lengths and shapes when a virtual cursor drawsnear, , just like live nerves that change when something is approaching them. 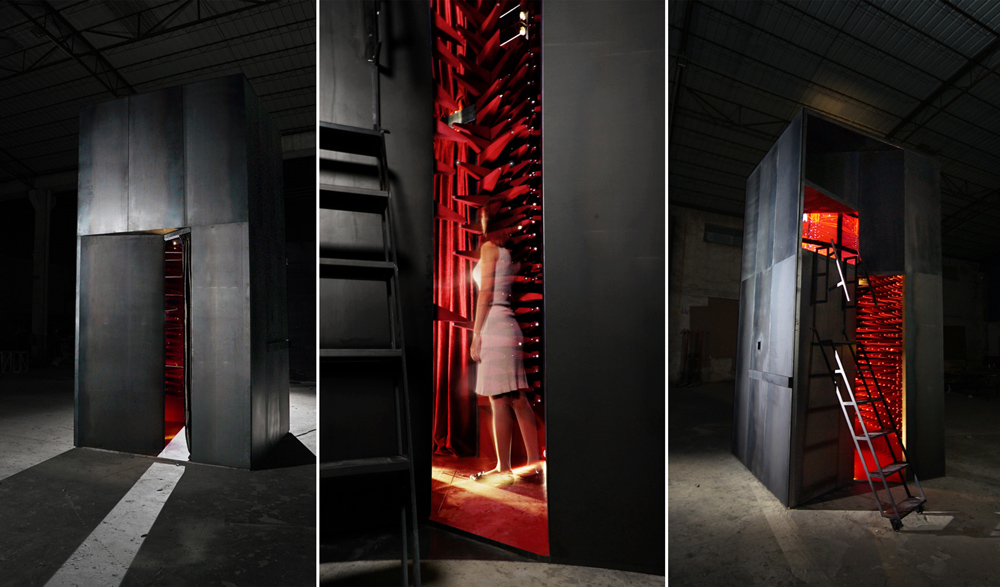 The “shell” of NERVEis made of black steel plates that are airtight as if it’sa prison or a cage. In the designer’s eyes, it’s just like themask thatpeople wear in modern days in order to disguise themselves,hiding their internal tenderness, and reject sunshine from the outside world. The small square hole inthe wall is the only window that you can peek into the inner-space and outside.

The stage kicked off when you pass through themassivecurtain. There are nearly 900 “Nerve antennae” made of sponge of different lengths and angles inside NERVE, andeach antenna has in-laid sparkling optical fiber lights at the end. These red thorns surround a narrow, meandering path, implya slightly dangerous journey. The ceiling mirror gives unlimited extension to the space. Standing inside this space, one may be puzzled: what kind of story is this space trying to tell?

Shuttlingthrough this narrow path, you can find 16 Touch Bar sensors installed on the ends of the 16 longest “Nerve antennae”. Thesensitive “NERVE” will be triggered when you touch them, and different sounds arereleased: alarm, footsteps, door knocking, wheezing, etc. These seeminglyordinary sounds could cause a mental disorder patientfeel extreme tension and fearat home alone. Walking out of the “black box” with undetermined mood, when you climb upthe ladder on the back of NERVE,you will find a mirror media room on the second floor. The video shows the truth of this installation. Those terrifying scenes are the reality that most psychological/mental disorderpatients have to grapple with. They suffer not only from illness but also from people’s misunderstanding, intolerance, and refusal to listen. They are marginalized, mocked, and accused in society.

“What if I become one of them someday? Will I be abandoned just like them?” …… 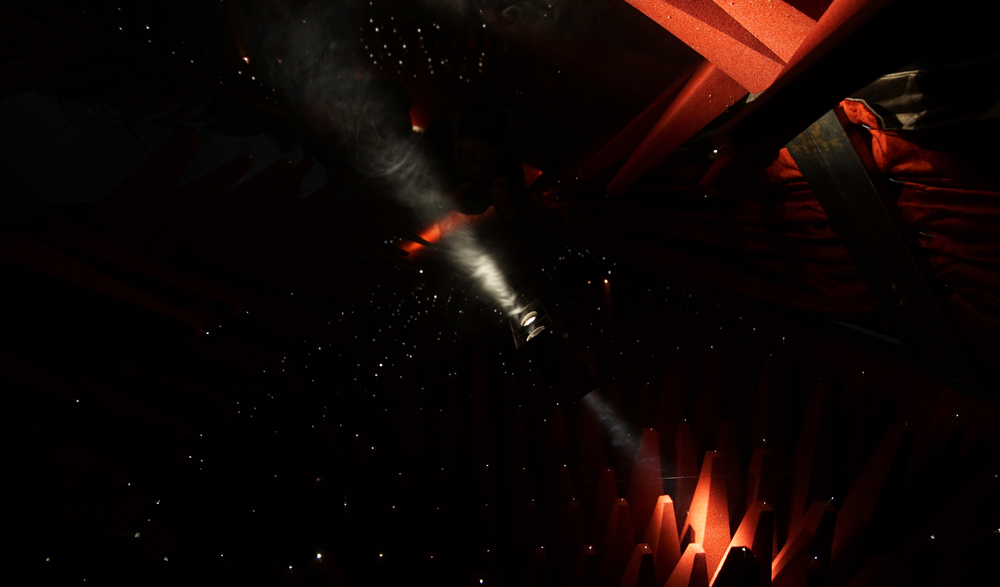 “NERVE” cannot give you the answer, but everyone has its own answer.